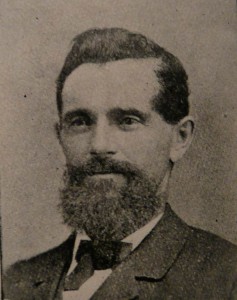 In the mid to late 19th century, John C. Lewis was one of west Michigan’s most successful businessman with significant financial and lumber interest. He married Augusta Covell in 1865 and partnered with Augusta’s brother Andrew J. Covell in a highly successful mill operation in Whitehall. The family holds a significant place in the history of Whitehall, Michigan.  With the wealth achieved from these lumber operations as well as lucrative investments in pine lands in Wisconsin and Michigan, the Lewises built their grand residence on a small bluff overlooking White Lake in 1878. 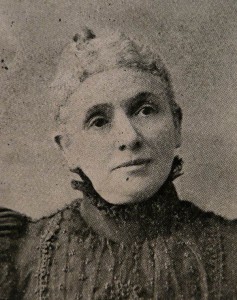 Mr. Lewis died at a relatively early age in 1894 leaving the property to his wife and three daughters, Lizzie, Nettie and Florence. Mrs. Lewis passed in 1928. Florence, their youngest daughter, lived at the property until 1944 when the ‘Showplace of Whitehall’ was sold out of the family to Ravenna farmers, William and Rose Hildebrandt. 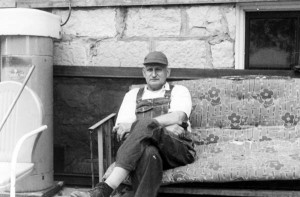 The Hildebrandts operated the house as a 9-room boarding house called Lakeview Rooms.  One day, while Rose and William were burning papers in an incinerator that had been fashioned from an old boiler, tragedy struck.  The incinerator was not vented properly and the built up steam caused a deadly explosion.  Mrs. Hildebrandt was killed instantly.  Mr. Hildebrandt died from his injuries about a month later.  Additionally, the explosion caused a fire that could have easily consumed the entire house.  Fortunately, firefighters were quick to respond and were able to save the house.  The Hildebrandt family continued to operate Lakeview Rooms until 1976 when the house was bought by the Blue Lake Fine Arts Camp.

Blue Lake Fine Arts Camp used the house as a school for the arts and as lodging for out-of-town performers appearing at the Howmet Playhouse directly next door.  There are many people still in the area who remember the days of the wild ‘after parties at The Lewis House’.  Apparently the front porch roof was a favorite hangout.  Indeed, we found more than a Rolling Rock bottle tops out there!  The Lewis House had very little insulation and proved to be a burden for the camp to heat in the cold Michigan winters.  As a result, for much of their tenure, the arts camp shut the house down from late Fall to late Spring.  Ultimately, Blue Lake Fine Arts Camp built a theater and housing on site and listed The Lewis House for sale.  That’s where we come in.

Greg and Debi Hillebrand happened to wander through Whitehall in the summer of 2009, after attending Greg’s high school reunion in Davison, MI.  We were immediately in love with the area and instantly charmed by the town.  We ended up acquiring The Lewis House from Blue Lake in September of 2009 but had no idea what was in store.  We only knew that “it’s a cool house” and we set out to ‘fix it up’.  One thing led to another, the ideas became grander, somewhere along the line, we decided that a bed & breakfast made good sense and we started the process of bringing The Lewis House back from near ruin.   After many ups and downs, a few do-overs, tons of investigation and learning and six long years of restoration, The Lewis House Bed & Breakfast became a reality in June of 2015.

There are so many aspects of the renovation, it is hard to know where to begin the tale.  We spent a full year just laying out the floor plan, adding bathrooms so that each guest room would have its own, adding back walls that had been taken out over the years, taking out walls that didn’t make sense and all while working within the original footprint of the house to the best of our knowledge.  During this time, we also did extensive research on the history of John C Lewis, Augusta Covell and The Lewis House with the goal of getting the house listed on The National Register of Historic Places.  We were really excited the day that approval came through.  More on the renovation to come later!

The Lewis House survives today as a beautiful example of 19th century architecture and a reflection on Whitehall’s lumber boom days. It is certainly the largest late Victorian house in Whitehall and a well-known landmark in the White Lake community being one of the stopping points along the White Lake Historic Walking Tour. Most people in the area view it as one of their most important local historic treasures.

For Mr. Jim Staples, neighbor and descendent of both the Staples and Covell lumbering families, the historical significance of the Lewis House is unmistakable:

“The Lewis House is the home of one of the four great families in Whitehall in its heyday – the Covells, the Hinchmans, the Lewises and the Staples. It is a still standing structure, which reflects White Lake’s golden years of the past. It is a clear anchor to the unofficial, but distinct historic district in Whitehall, and of the three homes of the prominent families still standing of that golden age, it is the most magnificent.”

The John C. and Augusta (Covell) Lewis House is listed on the National Register of Historic Places and will remain a cornerstone in the history of Whitehall, Michigan. 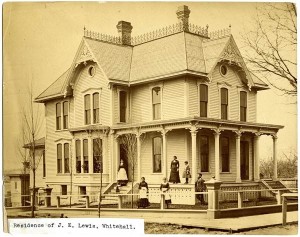 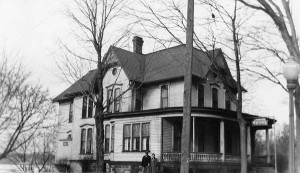 Lakeview Rooms, c.1950
Rose and William Hildebrandt in the foreground 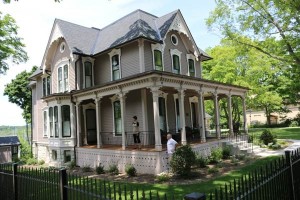